Itâ€™s the last day in 2007. This year has brought a lot of change to my life. Just shortly after ringing in 2007 I found out I was pregnant for the third time. I started having dreams about the pregnancy almost immediately, dreams that said I had two babies in my belly. Every dream ended with me giving birth to first a boy followed by a girl. I thought it was just me feeling anxious
about adding to our family. Then at my first prenatal check up clear as the sun were two little peanuts with little hearts blinking away. Twins donâ€™t run in our family and we conceived naturally so this was a shock to say the least. A year later and Iâ€™m still pretty much in shock. It was a long 20 weeks waiting to find out the sex and I was convinced we were having a boy and a girl (all those dreams). That part of my dream was wrong; God blessed us with two beautiful girls. I had an easy twin pregnancy and went into labor a few days before 38 weeks. The girls were delivered via c-section September 16th, thus ending the child bearing part of my life. Four kids are more then enough, so we are done.

END_OF_DOCUMENT_TOKEN_TO_BE_REPLACED

Today I am 16 weeks and 5 days pregnant, and I got to hear my babies hearts beating. Any mom or dad knows this is a wonderful sound. Concrete living breathing proof of life. Not only that but now I have an idea of where they are for the momment. 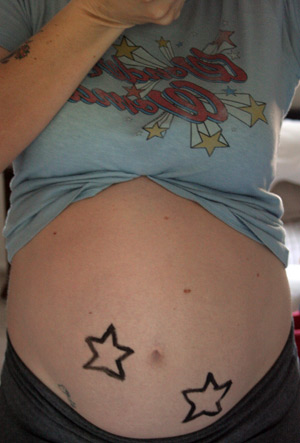 END_OF_DOCUMENT_TOKEN_TO_BE_REPLACED

With our new placeâ€¦The Mooshoos got new digs. After finding out that we had two babies on the way it became very clear that our current quarters were going to be tight at best. So we packed up our two-bedroom duplex and took over a four bedroom, two-car garage glorious house. A free standing no one connected to us house. Our own driveway! An amazing back and front yard covered in soft plush grass-that we donâ€™t even have to cut, because the landlord employs a gardener. A Gardener! Oh and carpet wonderful quiet soft un-scratch able carpet. And this fall and winter we will be snuggling up by our very own fireplace. Itâ€™s a dream that I hope Iâ€™ll never wake up from.

END_OF_DOCUMENT_TOKEN_TO_BE_REPLACED

I had my second prenatal appointment today. I didn’t get to hear their heart beats though-I got to see them! I had an ultrasound; ya know there really are never enough of those. Two perfect babies lying on their backs stacked one on top of the other in their safe little sacs. One head at one end one at the other. Two delicate little profiles, with fierce beating hearts. The shock is gone and for the moment all the little jitters of anxiety quiet. Past the chance of a disappearing twin and much lower risk of miscarriage.

END_OF_DOCUMENT_TOKEN_TO_BE_REPLACED

Growing two babies is kicking my butt! When I heard that I should throw out everything I know about being pregnant and just go with flowâ€¦.ehhh I mean really how different can it be?!? Well my body let me know the answer to that really quickly. Every day is something new, some days are good and some are really bad. I spent two weeks climbing the walls hungry while also feeling extremely nauseous. Itâ€™s pretty dang frustrating to be so hungry and not be able to eat. Every thing sounded disgusting and I ended up forcing down lots and lots of crackers. That seems to be going away now (knock on wood). Whatâ€™s not letting up is the exhaustion. I have realized the days of cleaning the house in one morning are over. Now I have to pick a chore a day. Even my daily walks have to change because an hour is wiping me out. Literally we come home and I canâ€™t get up again for the rest of the afternoon-which doesnâ€™t mesh well with two toddlers running around. I read some where when you find out youâ€™re having twins they tell you â€“you have to slow down-what they donâ€™t say is how much. And if you have kids you really have to prioritize. Spending time with my boys is more important then clean floors.