Today the girls are 10 months old. The time has actually gone by very fast and when I look back itâ€™s mostly a blur. Itâ€™s no secret the last 10 months have been geared toward survival and nothing more. Weâ€™ve done a lot more then survive. We are alive and thriving. 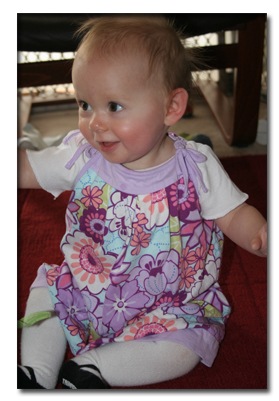 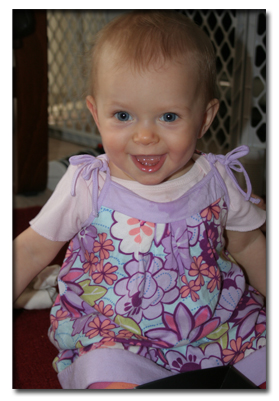 The girls are full into solid foods, there are few things they wonâ€™t eat. Some favorites at the moment are peas and chick peas. I give them defrosted whole peas and canned chick peas (I pinch off the skin). They are really into feeding themselves. We are also mobile, and in completely different ways. The girls mastered sitting and have quickly moved on to exploring. Cora was the first to venture out in an army style crawl-she is fast. Cuba just today started to do a sort of scoot crawl. While sitting up she leans forward and pulls herself forward with one leg and her arms. Itâ€™s pretty interesting to watch. She hates being on her tummy so itâ€™s no surprise she came up with this way to get around. Cuba also loves to pull up on anything that will get close enough and stand still long enough. Theyâ€™re both waving and Cora claps whenever you say Yeahhhhhh with a huge smile on her face. Itâ€™s insane how much theyâ€™ve changed just in the last month. Everything just kicked in, they went from being a wee bit behind to being right on track. Cora has 3 official teeth and 5 more breaking through. She hasnâ€™t been too fussy, but we have been using a good bit of ora-gel and motrin. Cuba on the other had still has an empty mouth. I hope the poor thing doesnâ€™t end up with them all at once. Cora is sleeping through the night, she goes down around 7 and wakes around 7. Cuba is another story all together. Ever since she figured out how to sit up, she does it the moment you set her down. She ends up falling asleep in a sort of yoga position and still wakes up at least twice a night. They were both sleeping through the night for a good bit but like everything child related the moment you get used to something it changes. So sleep for me sucks. I just keep thinking – that and so many things will get easier when theyâ€™re weaned. Our worlds are going to open up. Every twin parent Iâ€™ve encountered says the same thingâ€¦â€it gets easier when they start walkingâ€. We are so close I can taste itâ€¦

Things WILL indeed ease…whether with the onset of walking or just “getting older.”

Either way, you have some seriously darling babies!

I love them in those dresses…sooooo cute!!!