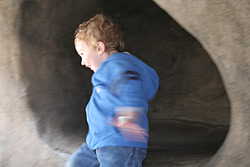 I am sad, tired, and lonely. I dread Monday because Ev has to go to work and I’m left to fight all the unhappy people in my house. I feel like a failure as a mother…I don’t know what to do with Bub all day. I try including him in the stuff I have to do or breaking out the crayons and big pieces of butcher paper-making paper airplanes-everything is only exciting for a minute or two. Not that I expect him to be entertained for any long length of time but more then a few minutes. The only thing that keeps him out of trouble is watching TV. I don’t like him watching TV. I don’t understand it, he has so many toys. And I try to play with him – he just gets mad and takes all the toys away. I don’t know what I’m doing wrong or what else to do with him. I feel like I am failing him. 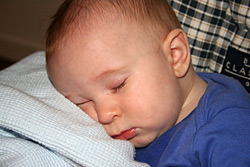 Then there’s Aid who I also don’t know what to do with. I hate to admit this but I no longer what to breastfeed or co-sleep. He rarely just nurses; he wrestles, bites, smacks, kicks, and pulls my hair. While this is happening he is stretching my nipple to lengths I didn’t know were possible and IT HURTS. We have 3 months until he is a year old and I am torn and over run with guilt for even considering giving up this close to the end. And on top of that my practical side can’t justify spending the money on formula. Then will he even take a bottle (Bub wouldn’t) and will it take 3 months to switch him over? This crosses over into the co-sleeping-that goes well from about 11 until 2 am. I am embarrassed to say that some how I have messed up and Aid will only sleep in our bed and while I can nurse him to sleep in our bed at night and sometimes get up for a few hours of alone time I can no longer lay him down to sleep alone (without nursing or laying with him till he’s asleep and as soon as he realizes I’m not there he flips out). He takes all his naps during the day either on my lap or on my back. He won’t sleep in his crib and I would lay him down in our bed and would have to nurse him but with a 2 & ½ year old who doesn’t nap I can’t really shut the door and lay down with him. Day time I can deal with though…its night that is really giving me problems. Around 2 am it starts…Aid wakes and can’t seem to get back to sleep. I try nursing-only works for 10-15 minutes before he’s kicking and fussing. So I switch sides and the same thing happens and this goes on until 7-7:30 when he finally does go back to sleep (by that time we have already gotten up and been watching cartoons) on my lap. But by then Bub is awake so I can’t go back to sleep. We have tried all the methods I could find for helping him go to sleep alone and nothing has worked. I feel like I am failing him too. 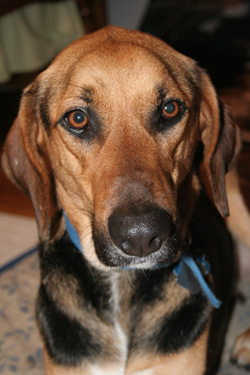 Since that isn’t enough our dogs have begun fighting and have to be separate at all times. Turkey our youngest hit social maturity and decided he no longer wanted to be at the bottom of our pack. His method of moving up is challenging our oldest dog Pep. The fights started out as just really ugly sounding wrestling matches that ended themselves. Now they end with us breaking them up and Turkey badly injured-Pep is much stronger and out weighs him by quite a lot. We don’t live in a big place so it has not been an easy task keeping them completely separate, esp. when you have a very helpful toddler who can open doors. I called the humane society to ask their behaviorist questions but she wasn’t qualified to help in this situation. Our search for a new home has been unsuccessful and we were told because of the dog aggression the humane society would put him down. But really I don’t consider him dog aggressive he is simply trying to assert himself with the wrong dog. So then I thought maybe a no kill shelter-but that would be unfair because he would have to be kept a lone and the no kill shelters just don’t have the resources for that- and they rarely take animals from the general public. So we are stuck in a very sad situation. If you would like to give Turkey a new home go here 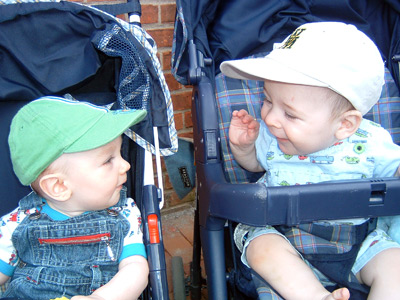 Sorry for all the negativity today, I just feel so overwhelmed and helpless-like I should have answers but don’t. We’ve been back in the bay area for almost two years and I still haven’t made any mommy friends. I really wish I could find just one-someone who stays home like me that I can get together with during the week. Someone who I can sneak off with when I need a break. I talk to my best friend almost daily online and chat with my sis in law at least once a week on the phone and occasionally get together with the girl friends I do have here-but I need a regular friend. I miss my mommy friend in VA. Pipa and I have sons just less than 2 months apart. We started walking while pregnant and continued until right before we moved back to California –I really miss those walks. Mostly because they were more about talking then exercise. I wonder if I would feel the need for a mommy friend if I hadn’t already had one…I wouldn’t know how nice the connection is and how easy it was to be friends. I guess a friend is a friend but is it better to have one who is in the same place you are in life? I think yes, because it is easier to be friends. Your worlds are similar so it is easier to get together and you are more understanding when you can’t-because you know what it’s like. I’m just having a day. But it’s only a day and tomorrow will be a new day.
Oh and above is a baby Bub with his very first friend Groozer-Pipa’s son on one of our many walks